San Francisco native Bonnie MacBird attended Stanford University where she earned a BA in Music and an MA in Film. Her long Hollywood career includes four years as a feature film development exec at Universal, the original screenplay for the movie TRON, three Emmy Awards for documentary writing/producing, eleven Cine Golden Eagles for scripted and documentary work, numerous produced plays and musicals, and theatre credits as an actor and director.

Art in the Blood, her first novel, written in the style of Arthur Conan Doyle and featuring Sherlock Holmes and Dr. John Watson, was published in 2015 by HarperCollins and released in 17 languages worldwide to critical acclaim. It is the first in her series and was followed by Unquiet Spirits in 2017 and The Devil’s Due, due out in October of 2019. The Three Locks is in work for 2020.

In addition to her writing, Bonnie has worked in theatre extensively as a playwright, actor, and director. She is an also accomplished watercolorist. Bonnie teaches a popular screenwriting class at UCLA Extension, a course which develops creativity based on multiple art forms while honing the very specific techniques of screenwriting.

Bonnie is a regular speaker internationally on writing, creativity, and Sherlock Holmes. She is married to computer scientist Alan Kay and splits her time between homes in Los Angeles and London. 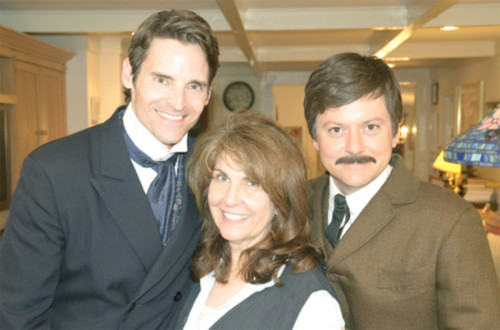 Bonnie with actor friends Rob Arbogast as Sherlock Holmes and Paul Denniston as John Watson. Rob and Paul modeled for the illustrations for ART IN THE BLOOD, and starred in  THE BLUE CARBUNCLE, adapted and directed by Bonnie.