Explore the biggest mystery of Conan Doyle, Sherlock Holmes himself in ART IN THE BLOOD –  a fast-paced tale of kidnap, murder and art theft featuring Sherlock Holmes and Dr. Watson as you love them. It will be released by Harper Collins worldwide on September 10, 2015.  Click  to  order from  AmazonUSA  or  AmazonUK  or  Barnes&Noble  or the Special Edition with illustrations and annotations from The Mysterious Bookshop

“Featuring a pitch-perfect Holmes and Watson, ART IN THE BLOOD bristles with the intelligence and wit we love in the original adventures. Dark, funny and surprising to the end. No one who loves Sherlock Holmes should miss this.”
—Peter Samuelson, producer of Wilde, Tom & Viv, Arlington Road, Revenge of the Nerds, and many other films.

London, a snowy December, 1888.  A disastrous Ripper investigation has left 35-year-old Sherlock Holmes in a deep depression and back on cocaine. The newly married Watson is summoned urgently to 221B to rouse his friend.  Nothing works until the arrival of an intriguing encoded letter from a beautiful French singer, Mlle. Emmeline La Victoire.  Her illegitimate son Emil (with the famous art collector and humanitarian Earl of Pellingham)  has disappeared and she fears him kidnapped, and she herself  has been accosted in the street.

As they travel to Paris to come to her aid, a larger picture is unveiled. This same untouchable Earl may well be behind the world’s largest art theft  – the priceless Marseilles Nike – and additionally the disappearance and murder of several boys working in his own silk mills.  Could he have harmed his own son as well? Holmes and Watson are tasked to solve the case and bring the culprit to justice.

Before they can succeed, they must navigate a complex web including a treacherous French rival detective, Vidocq, who is in love with their client; Sherlock’s oddly threatening brother Mycroft, who has his own stake in the case; and a rising tide of murders which keep the true facts just out of reach.  Can Sherlock Holmes overcome the weaknesses of his own “artistic nature” to save the beautiful singer and her son, and put away the real villain behind these many crimes? Coming this fall from Harper Collins. 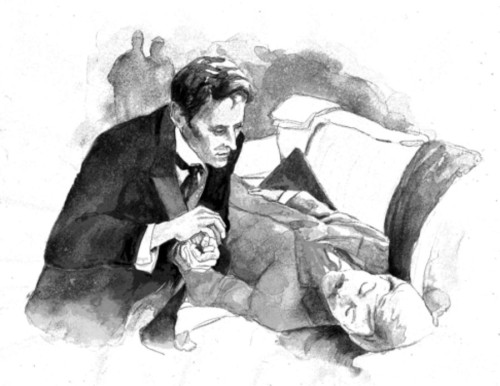 The face of my friend, Sherlock Holmes, floated hazily above mine with an expression of fearful concern. “Watson!  Watson!”