More about The Three Locks 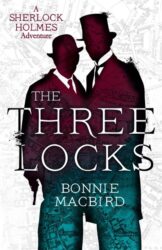 Blending elements of magic, science and intrigue, The Three Locks is an immensely detailed novel that gives the reader more than one mystery to ponder over – with two murders and a mysterious box sent to Dr Watson at the heart of it all.

Beginning with the unexpected arrival of a box sent to Dr Watson, as the title suggests locks are really at the heart of the story. Another mystery to be solved is a magician who has been sent a finger, whose wife suspects that this is a warning and threat against his life, while a Deacon asks for Sherlock’s assistance in finding a young woman whose disappearance doesn’t concern her family. Each mystery has been beautifully intertwined, leading the reader on a variety of journeys.

Expertly written by Bonnie MacBird, it is pleasing to see that it is Doctor Watson who appears to be at the centre of the proceedings for this one – as we not only find out more about his background in small detail, but also see how he goes about his work as a doctor. But equally, we get a deeper understanding of just how strong the bond between Holmes and Watson is – as how Watson handles Holmes after he takes laudanum and cocaine. There is real care and affection in their friendship.

On top of this, it takes great skill to manage not just one plot line but three in one go – but each mystery is given equal time to be solved, providing a nice balance to ensure that the reader remains thoroughly engaged. There is a a great pace and energy about the story, that matches the way in which Sherlock Holmes applies himself to each mystery to be solved, heightening the sense of drama nicely.

But again, it is the way in which the little details of the case are revealed – particularly when the pair return to the Deacon’s room. It’s this attention that reveals just how MacBird accurately has recreated the world of Sherlock Holmes – even in the types of smells described (as grim as some of them are) – it makes the reader feel as though they are right beside Holmes and Watson on every part of the story.

Vivid and exciting, this is a strongly written Holmes adventure that keeps the reader hooked from start to finish.